Learnings From The Great Resignation

Learnings From The Great Resignation

During the COVID-10 pandemic of 2021-21, a global phenomenon called “The Great Resignation” occurred. What exactly was that? According to Wikipedia, “The Great Resignation, also known as the Big Quit and the Great Reshuffle, is an ongoing economic trend in which employees have voluntarily resigned from their jobs en masse, beginning in early 2021.”

In 2021, COVID requirements were relaxed, and employers wanted people back in the expensive building(s) for which they were paying high overhead costs. The issue was that many employees were experiencing working from home for the first time. 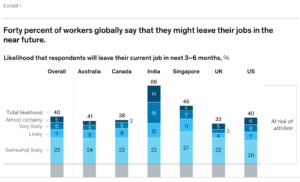 What were some advantages of this flexible work arrangement?

What were some of the disadvantages of this flexible work arrangement?

Both employers and employees have made drastic changes. Employers are now clear as to their terms and conditions while employees are in a better position to negotiate salaries.  One of the key findings was that workers were already dissatisfied with their working conditions and felt employers treated them as if they were dispensable.  Employers were unaware of the discord with employees and didn’t realize the level of their distrust.  Now that both parties are at the table, and talking, a large number of employees felt they would return to their jobs if the working conditions changed.

That is good news for everyone!