Women in the Military

Women in the Military

I’ve never been in the military. I’ve never even thought it was a career opportunity for me – with men bossing me around and waking me up to run miles at the crack of dawn.  During the ’70s’, I do recall my Brooklyn, NY elementary school class religiously writing holiday letters to the men overseas (never women), wishing them well, and I enjoyed the idea of men, in a far-away place called Vietnam, were protecting me and the United States of America.

Imagine my shock, in the ’80s’, when my younger sister told me that she was signing up for the Army!  I believe she was in her third year of college and “wanted to travel and see the world.” I pictured her in a Bob Hope special, singing and dancing on a USO tour because that’s where I usually saw the women on TV.  Then, they bombed the World Trade Center complex where I worked…and she was being deployed.  I could only picture G.I. Jane! Until that time, I had never given much thought to women soldiers in the military. 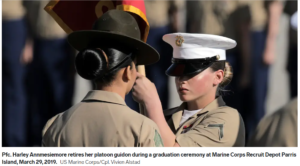 Here are three opinion pieces from two veterans and a currently active soldier:

When you belong to a unit that is mostly male (transportation unit), it was the standard practice that the females could not pull their load. We were always assigned to menial tasks and secretarial duties. We were also not allowed to carry the guidon for the unit as they did not want the ladies up front as representation. You must carry the guidon while running up to 5 miles (and they didn’t think that we were strong enough to do it). It took a lot of effort, but we eventually were able to prove ourselves.

Women should not be treated differently than men.  We all took the oath and signed up for service. When push came to shove, we were all soldiers. The enemy did not discriminate and killed equally.

The topic of transgender women in the military is still very confusing for me, and I’m torn on the issue but if a transgender person wants to serve their country, then they should be given the opportunity. However, they should be prepared to face people who are also confused and not ready for this kind of situation. If you want to do it knowing you are transgender and the issues that you will face, don’t act surprised when the issues appear.

As I have been out of the military for at least 27 years, I am out of touch with the current situation of females in the military today.  But, yes, the military is a wonderful way to become introduced to many different fields in which I did not think many women were interested. When in Saudi Arabia, I met many female pilots and mechanics that changed my perspective on female careers.

Although I was a Supply Personnel, I was married to an Aviator, and we served together in the Army Married Couple Program with Joint Domicile. In other words, we were Dual Military, served together on assignments strictly around Army Aviation Units or with the Air Force. With that said, In Army Aviation, I saw few minorities and hardly any female aviators in high-ranking positions. The pilots, crew chiefs, and warrant officers were almost always white and male. These men in leadership positions (officers) would call us gals or females– instead of addressing us by our name or rank – which was stitched on our uniforms.

Women with children didn’t really get any special privileges during my career. You were non-deployable while pregnant and after delivery on maternity leave. After that, it was business as usual, and that included deployments. Single Parent Soldiers and Dual Military Couples (husband & wife both serving) had to have a Long Term and Short-Term Family Care Plan in place to stay in the military. Short Term Family Care Plan was for less than 30 days deployment, and Long-Term Family Care Plan for 30 days and longer. This was a legal packet signed at JAG with specific instructions for the Care of Minor Children while the parent/parents were away. I feel that there should not be any special treatment for deployment or combat because it comes with being a soldier on active duty. The motto is “The Mission Comes First!”

I am a lover of people, and I believe in “judge not,” – to each his own! With that said, I feel that transgender has no place in the military. I can recall instances on active duty where derogative slurs and conflicts occurred because someone was referred to as “gay or queer,” even with the “don’t ask, don’t tell” policy in place. I know of instances where people enlisted for the benefits to complete their transgender surgery process and hormone treatments at the government’s expense.

I am Old School Army, and I don’t really know what changes I would like to see for women. I have issues with them changing the female uniforms to conform to “today’s” styles and trends and the regulation change in hairstyles, fingernails, and jewelry. We used to focus more on the mission and not fashion.

I would absolutely recommend the military to young, diverse women looking for an honest career option simply because the Army was very beneficial to me. They must be very realistic and understand that the military is not a picnic – deployments are not uncommon, and sometimes combat is required. Remember, they took an oath to defend and protect. But the good outweighs the bad, and all branches offer plenty of career opportunities that involve going to school for training.  That training can be used later as a civilian. The military offers educational benefits, helps them establish credit, allows them to purchase a home with VA (Veterans Affairs) Loans, and provides excellent references that you can use to prepare for a decent life after the military.

The Army Career and Alumni Program (ACAP) was a great help for me. ACAP assists military personnel during their career transition from Army Green to Corporate Gray. I started ACAP about six months before my separation from service. ACAP was very helpful for me in finding Civilian Employment, writing a resume, going on a job interview, using my education benefits (GI Bill, etc.), and even finding an excellent military-friendly state in which to reside. Veteran Advocates are available at every Department of Veterans Affairs facility at no cost to the vet. My VA Representative was very instrumental in helping with my reintegrating into civilian society.

I spent a lot of time working as a Chaplain’s Assistant. I currently belong to Vet Support Groups, and I also get treatment and counseling for PTSD. I volunteered with the Homeless Vet Program, Wounded Warrior Project, and R.E.D Fridays (R.E.D Remember Everyone Deployed).

During a Washington, D.C. area tour, I was a Senior Captain and experienced discrimination from a commanding officer.  I was reassigned due to my “lack of performance” on a training mission I was neither responsible for nor assigned to do. I was not alone in receiving undue scrutiny; it became apparent that those of us being scrutinized were of the same demographics.  Often, the individuals who should have been scrutinized or criticized were male officers who escaped responsibility while their female or ethnically-diverse subordinates were scapegoated.  Not only did such scrutiny and criticism frustrate me as a recipient, but it was also toxic and demoralizing for others in the section as it permitted the continuation of poor leadership and work.

In the uniform, a Service member is and should be simply that – a Service Member.  A service member should be afforded the same dignity, respect, and care as every other human and, as a leader, my job is to acknowledge and show them that respect, dignity, and care. I have minimal experience working with transgender people in the military; however, in those limited experiences, I found that they were fine soldiers, quality personnel, and outperformed their peers.  One transgender soldier, a supply specialist, was personally responsible for the success of our training exercise.  I think transgender women are people and should be treated with the respect, care, and dignity afforded to everyone.

I have been fortunate in that I have seen many of the changes regarding women’s access achieved. The female restriction was lifted so that women can serve in, and command, combat arms units, and I have observed benefits provided such as childcare, and paternity leave and maternity leave expanded.  Still, the Services have much to do regarding changing sexual harassment, assault, and rape culture.  I think strides are being taken here. Secretary of Defense Lloyd Austin has accepted all the recommendations of an independent review commission. The most important one is that commanders will no longer prosecute sexual harassment, assault, and rape allegations.  Since most sex crimes happen to women, this demonstrates that this population is being heard and finally acknowledged. However, this is a start.  Until the number of crimes is significantly reduced and perpetrators are intercepted and, in many instances, prevented, there is still work that can be done.

The military is already a second career. I enjoy my time and service and am a service-minded person.  I still have many years of military service before me.  However, I hope to continue serving in higher education and at the state level in education policy.

I absolutely recommend military service to young women.  Though challenges and concerns exist in military service, this is no less true of any historically male-dominated field.  If young women have the talent and grit required to be military enlisted or commissioned officers, they certainly should serve their country and in doing so enrich themselves.  I daily am inspired by women, Army officers, who are sharp, competent, and lead with confidence. I believe that mentally strong, physically fit, young women with the desire to serve should look to the military as an avenue to contribute to and be part of something bigger than themselves.

Thank you, ladies, for your service. It’s cliché to say “thank you,” but it’s true and the best way to acknowledge the dedication to being a part of our military.  I appreciate your commentary on our armed forces past and current state. I hope the military keeps up with the general population for continued progress on this front – even small advances matter. I’m glad that each of you recommended the military as still a good career choice.  I can see the strides made; however, we have a long way to go.